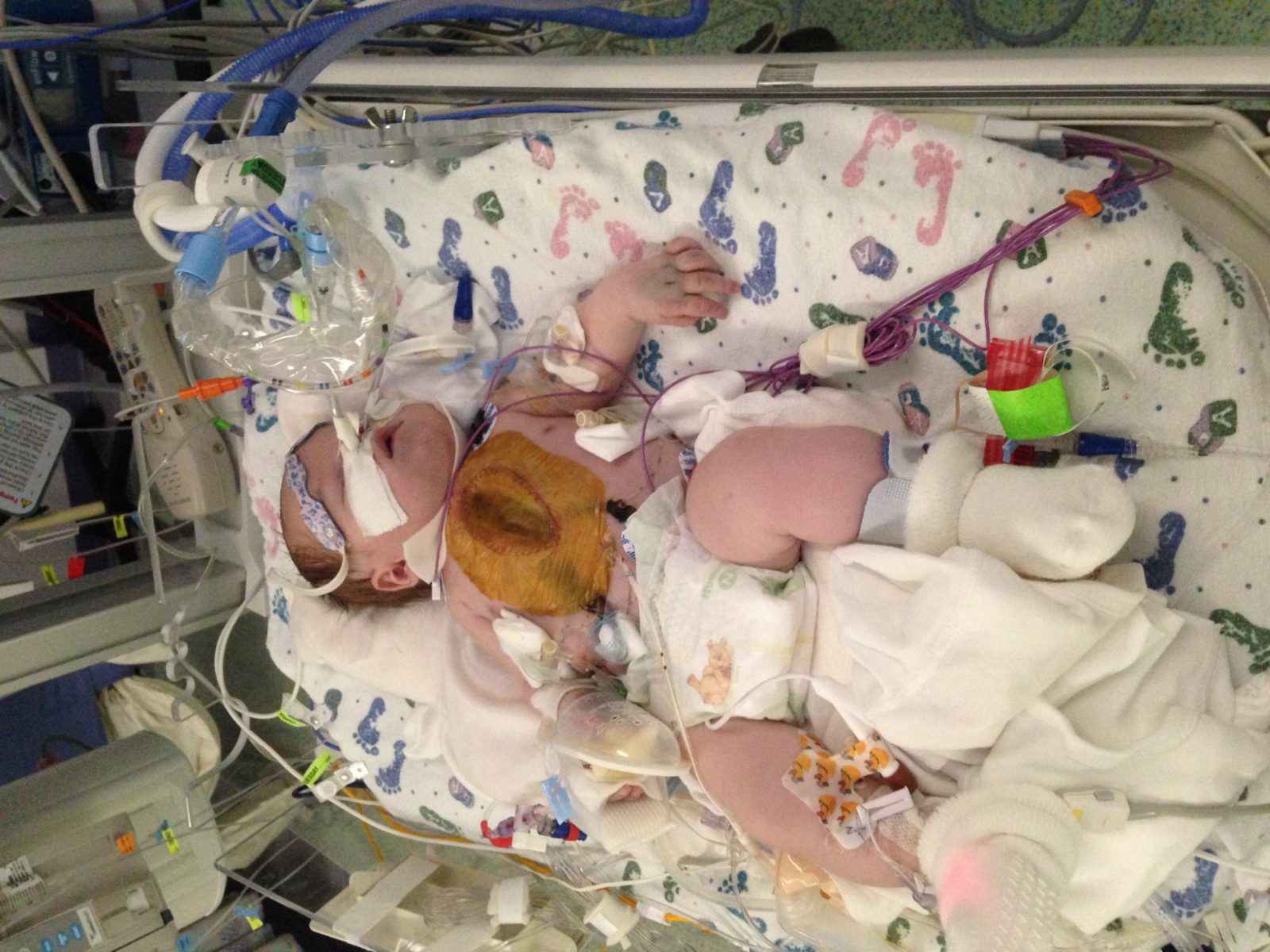 Unless there is a major change in his status I will be going back to daily updates in the evenings.

Talked to Dr. Meyer, who we talked to last night but who I didn’t realize was a Dr. The words “blessed” and “in and out like seal team 6” and “most stable baby in the unit this morning” were all said. He’s not out of the woods, he may just be in a nice clearing right now, but he is doing very well.

Right now his blood gas numbers are good, they are still fine tuning his CO2, so they have been going up and down on the respirator but everything else looked good. Blood pressure is good. They are sedating him a little more than he was since he was to the point of trying to open his eyes this morning and was not happy about all the poking and prodding.

The goal moving forward is getting his swelling down, which honestly he doesn’t look that swollen, probably because he was fairly swollen in the NICU. He hasn’t been urinating very much this morning so they are giving him some medicine to help him get rid of that excess fluid he has, the medicine helps his absorb the fluid into his system and then helps the kidneys filter it out. Once his swelling gets down then we move toward closing his chest up.

Thank you all again, the prayers and thoughts are doing an amazing job. We are very blessed to have you all. #TeamMicah”

Not a lot of change since the morning. He has been stable all day. He is breathing at a good rate and his oxygen input is at the same level as the general atmosphere, which is good because he isn’t requiring extra oxygen input. He didn’t really start urinating again until late afternoon and early evening, but if he keeps it up all night we will be in good shape. I listened in to the day nurse turning over to the night nurse, but it was a much more intense and number intensive turnover that I lost them several times. From what I could glean, he’s doing well but there are a number of parameters that need to get better over time.

The goal is for him to reduce his swelling through urinating. More or less they want him to pee out all the excess fluids that have been pumped into him over the last week or so. They were pumped in for good reason, but now he needs to get back to his own fluids.

His numbers all look pretty good, most of the additional stuff they had to give him today was morphine. He’s waking up a little too much, which drives his heart rate and blood pressure a little too high. But like I said he has been good otherwise. Talked to the doctor again and she said that if he gets his swelling down, we are looking at surgery to close his chest this weekend, and if he keeps going well from there, then respirator out next week. That’s pretty much the best case scenario with no setbacks. Right now, it has been a good 24 hrs after surgery and we are very thankful.

Thank you #TeamMicah and have a good night.”

Being in the CICU was different. For starters we didn’t sleep in the CICU. Due to the noise and lights and the smallness of the available couch we opted to crash in my mom’s room in a nearby hotel. It ended up being our room in that hotel for quiet a while. But unlike the NICU, we weren’t in the room with Micah overnight like we had been. We couldn’t just wake up right at 8am and wander over to all the doctors who were talking about our child during their normal rounds. Instead we had to get up and get functional enough to drive, park, and walk to the CICU before we could listen in to the doctors. We didn’t make it that first day…we didn’t make it most days. This was in large part due to the breast pumping routine of my wife and the relative earliness of the rounds. Throughout the day and into the night my wife was pumping her breasts to make milk for Micah, for when he would eventually need it. Every three hours or so it seemed like she was up pumping. It made for difficult nights considering the pumping routine involved cleaning the equipment as well as handling the milk. Then there was the psychological impact of being away from Micah for the longest period of time we had ever been away from him. Yes we were exhausted, which helped get us to sleep, but then there was a wake-up three hours later and then we weren’t quiet exhausted enough to fall right back to sleep, rinse and repeat twice a night at least. There was really no escaping the weariness.

The morning was spent speaking with the nurse about how Micah was doing and eventually the individual CICU doctor making his rounds. Both the nurse’s report and the doctor’s report were very encouraging. Micah was doing well, very well. He was the most stable baby in the CICU, which basically meant he wasn’t having any post surgery complications or infections. At least for the first day, but they were all good signs. Now we were all focused on getting him to chest closure and after that to the removal of all of his tubes and wires. It looked like he was also fighting the breathing tube a little as the sedation wore off so they had him under pretty deep.

The doctors changed during the day it seemed like, and the nurses worked twelve hour shifts with changeover around 6am and pm. We would listen in to the changeovers as they happened if possible and catch the doctors on their rounds. Besides these times and when the nurse was actively doing something with Micah the day was fairly uneventful. I won’t say boring simply because there were things to do. Maria had to be cared for, which is why having family in these situations is so critical. Young children aren’t allowed into the NICU or the CICU, someone had to be with Maria outside the units at all time. We were lucky that we had grandma, and at times grandmas and grandpas and that Maria had a place to sleep without us at her grandparents. Maria usually came up to the hospital during the day and we would take shifts with her and then she’d go back to her grandparents house in the evening. Playing with my daughter was one of those daily joyful things that helped me keep hope and get through the day.

We couldn’t eat in the unit so our meals were always downstairs in the cafeteria or out somewhere close by. We spent a lot of time outside the unit but also a lot of time in the unit just sitting next to Micah. Reading, writing, praying, talking on the phone, etc. I started the long journey of trying to figure our insurance stuff out. Fortunately Micah’s birth afforded us the life-event option to rework our insurance options. There were a bunch of things that needed to change and I needed to figure it all out before the 30 day window closed.

There was plenty to do while we waited for Micah to get better.