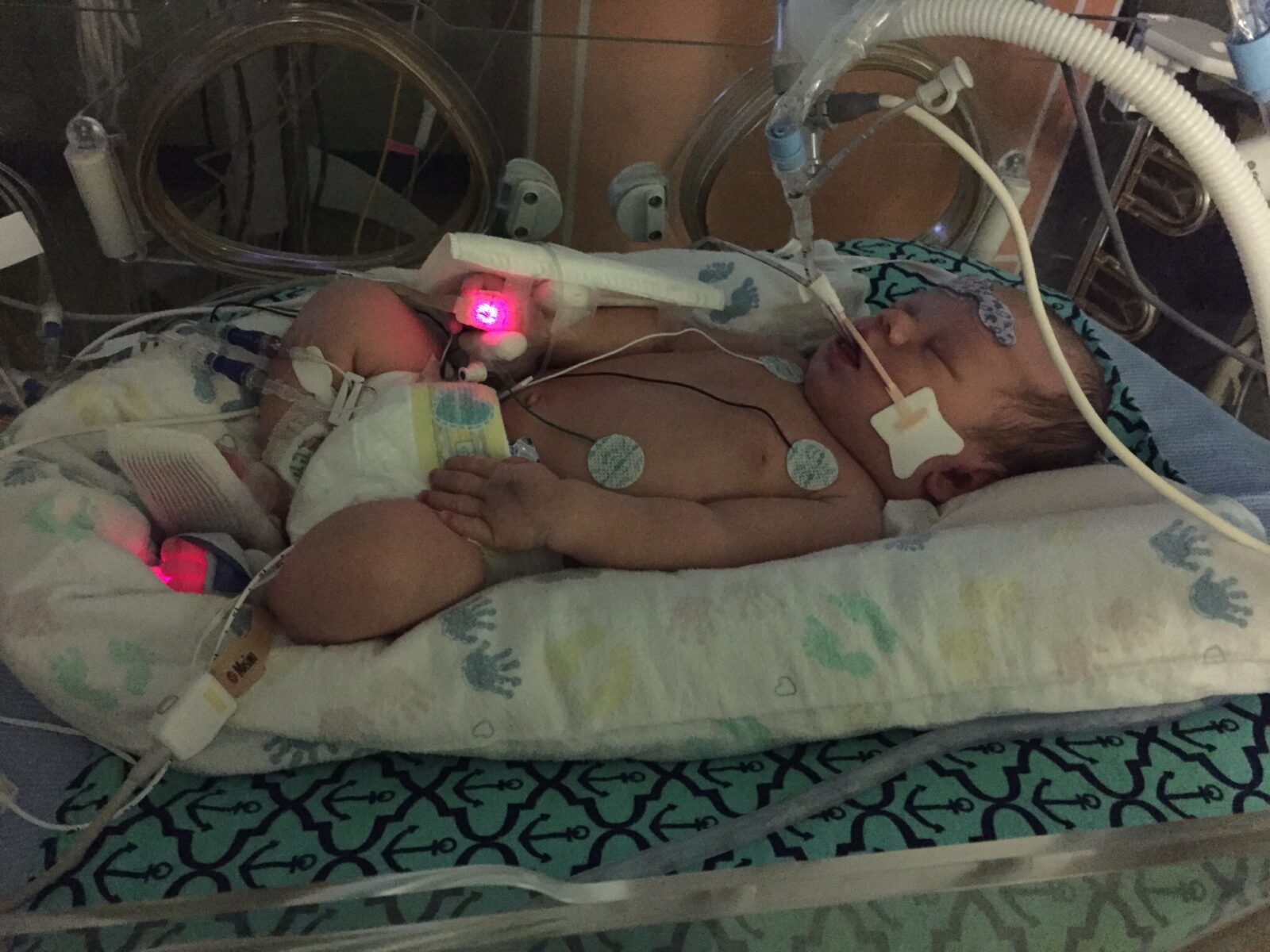 He is stable again. Looks almost the same as he did when I saw him last. The chest cavity is open again and the mesh is back on it. His heart function looks good on the echocardiogram and his blood gas is good. It does not look like the episode did any damage to his heart.

What happened: we don’t know the cause, but here is the sequence of events as far as I understand it. His blood pressure dropped rapidly in about a 30 second timeframe and his pulse dropped off as well. They moved from a nurse to three nurses to 9 doctors and nurses very rapidly and chest compressions had to be started manually. The surgical team from this morning came back and re-opened his chest cavity: which had been closed early this afternoon. They searched for a cause but couldn’t find anything wrong with the heart. Once his blood pressure and heart rate became stable they put a mesh covering back over his chest cavity.

The doctor’s suspicion is that his heart was ischemic, or wasn’t getting enough oxygen, and because of that his whole system fluctuated. Fluctuations in a baby post surgery with blood flowing through his System in an irregular way are often very bad, and this does happen to kids in his situation. The closure of his heart cavity earlier In the day complicated recovering his system, which is why the reopened the cavity.

Right now his heart and blood gases look good. They are looking at doing a head scan tomorrow, but most importantly he is being left to rest and recover from this. Many times when they can’t get the heart going again quickly they have to put the patient on the heart and lung machine. It is encouraging that they didn’t have to do that with Micah. But since he had to be resuscitated there is a possibility of brain or organ damage. We would appreciate thoughts and prayers that all his organs remained undamaged.

Thank you everyone for your thoughts and prayers. This has been a fairly scary day. #TeamMicah

When I reached the hospital, and more importantly when I reached the CICU waiting room, my wife and father were still waiting there. They hadn’t let people back into the CICU yet which meant that they were still working on Micah or just keeping everyone clear just in case. We went through the sequence of events again. My dad talked about Micah’s nurse, Rosa, and how quickly she had reacted and what all she had done.

It wasn’t too long after I made it to the hospital that we were let back into the CICU. Micah looked the same as he had when I had left the day before. After all that and he looked practically the same.

We asked the doctors what had happened, but the truth was there was no exact way to know. In my line of work you can usually easily get to the root cause of a problem with a piece of equipment because certain problems act one way and certain other problems act different. When you change the picture to look at more complicated equipment or a complex system then the story can get more difficult to piece together. With a human body things are significantly more complex and it’s amazing what we are able to figure out in the first place. All we knew was that his heart had stopped beating.

Sometimes I say, accidentally, that Micah had a heart attack, which my wife always reminds me is not what happened. Heart attacks are when your heart tries to pump blood but the blood has nowhere to go. Micah’s heart just stopped, plain and simple. They had re-opened his chest and had to reach in to his heart and massaged it back to life. Imagine, reaching into someone’s chest cavity and using your hand to simulate a beating rhythm in order to get the heart going again. I remember when my step father Bob had gone through Paramedic school and had been taught how to do just that and I remember thinking at the time how crazy of an idea that seemed. Now I was sitting by Micah’s bed and he was alive because someone had done just that.

I remember later that afternoon/evening seeing Dr. Tam walk by and look at Micah and his stats and then make an exasperated expression with his hands. As if to say “You look perfectly fine, why did your heart stop!” I imagine it hurts when you make a mistake like that as a doctor. A lot of the time they try their best and they do what they can and sometimes things don’t work. That’s a hard thing to take, but I have a feeling that it gets even harder when you make a judgement call and it turns out that it wasn’t the right call. I don’t fault Dr. Tam, not really, he made a judgement call and I trust his judgement. But things didn’t go as planned, or desired, or wanted. However you put it, I think Dr. Tam was pretty frustrated by that fact. I know I was.

The path forward from there was pretty much exactly the same as it had been the day before. Watch and wait, give him time for the swelling to go down and for him to start getting rid of the liquids in the natural way, that is to say peeing. Watch his blood gas numbers to make sure all of his organs looked good. Watch his breathing to see if he was getting stronger in that area. Watch his heart to make sure it remained as good as it had been before the stop. Eventually we would be watching his development to make sure there wasn’t any brain damage while his heart was stopped.

I think that was the scariest part, at least after he was stable again and I could think clearly enough to consider repercussions. It was knowing that his brain had been potentially deprived of oxygen and that that may have resulted in damage, damage that might not show up for a long time. There was no way to tell at this point, at least no way to tell unless it was absurdly obvious, which honestly is not something you want because that usually means organ failure.

So we watched and we waited and we prayed. That day will always stay with me and a lot of times when I tell Micah’s story I’ll bring up the heart stopping, but a lot of times I don’t. Those memories are often a little too hard to translate to other people. The fear, not just the intensity of it, but the type of fear, is hard to grapple with. Up until that day everything had more or less “worked as planned”. This had been a curve ball and it caught me off guard pretty hard. I had been working through “Micah won’t be able to be/do X.” and now the specter of “Micah may not live” had been brought to life. And all we could do was watch, and wait, and pray.