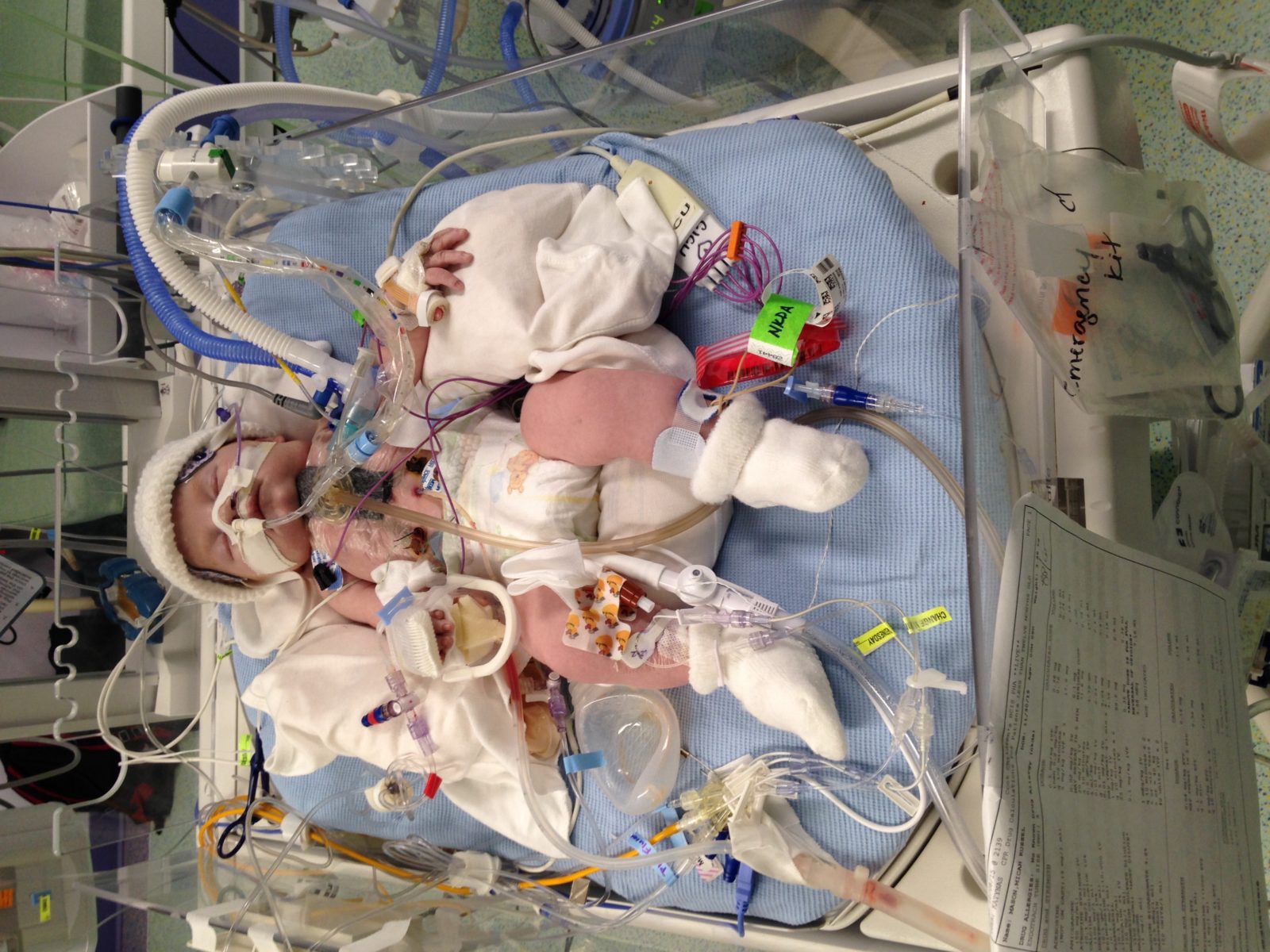 Spoke to the nurses last night and this morning. All very encouraging. Last night they said they were expecting him to be in much worse shape but that he was much more stable than they expected. He wasn't very swollen, and his bleeding was normal. He was urinating quite a bit, which is good news. His blood gases were "basically normal" this morning. He is starting to breath over the ventilator, I don't know if that is good or not but the nurse didn't seem concerned about it. The doctors were happy with his X-rays, both for his organs and for the fluid on the lungs.

It was ten o'clock at night when Micah came back from surgery and was admitted into the Cardiac Intensive Care Unit or CICU. The hospital was effectively a ghost town. We wandered down from the cardiac surgery waiting room to the CICU waiting room, which was palatial in comparison, had a much larger TV, a coffee machine and a fridge. It was also occupied by a couple of sleeping people, who I assume were parents. The truth of the matter is that while the rooms in the CICU had benches or a couch that could work well as a bed, especially for an exhausted person, that the conditions in the CICU and the rooms are not good for sleeping. There are many machines in the CICU, many things beeping, many noises coming from things connected to your child, and many noises coming from things connected to other children. The nurses also were not super quiet, and honestly I wouldn't expect them to be. They had a job to do and it was to take care of your child and all the other critical children in the unit that night. That being the case parents usually tried to find somewhere else to sleep. For a few parents, the waiting rooms were often the only option they had since they couldn't afford a nearby hotel, hadn't gotten into the Ronald McDonald House, and they didn't live or have family or friends in the area. My mom had graciously offered us the bed in her hotel room, since her room had a pull out bed from the couch, which is where we stayed while in the CICU. The hospital's rules were more or less silent on the issue, but the waiting rooms weren't built for sleeping so it wasn't a great option. Either way, there was another waiting area outside the CICU that was open to the hospital's atrium area so we waiting out there for Micah to come by.

They told us when he was out of surgery that we should head down to the CICU waiting room and from there we would see him get wheeled past and we could kiss him on the way by. Then we had to wait to talk to the surgeon, Dr. Tam, and then we could go into the CICU and see him. We weren't down in the open air waiting room for very long before Micah came by, we saw him and gave him a kiss. Honestly I don't recollect at all what he looked like when he came by, I mostly couldn't see him due to all the wires and tubes and blankets. I remember his head and that's about it and even then his face was obscured by a ventilator. I did give him a super faint kiss but the reality is I was afraid to get anywhere near him for fear of passing something on to him that could infect him. Maybe an ungrounded fear due to the medication he was on, but fear is usually not terribly logical, so I gave him a tiny peck and then kept my distance. He was wheeled past and then he was gone.

We were back to waiting. I called my mom and dad to let them know that Micah had come out of surgery and had made it to the CICU. And then we waited for Dr. Tam. I'm not entirely certain what the life of a children's heart surgeon is like but I can't imagine it's anywhere approaching easy. Even when you take out the consideration that the surgeon is working on a heart the size of a walnut and the plethora of surgical techniques that go with the plethora of heart issues, surgeons seem to have pretty early hours and pretty late nights. Dr. Tam came out of the CICU around 10:30 PM and we spoke fairly briefly. The surgery had gone well, he had decided to put in a Sano shunt, which is a tube that goes from the right ventricle to the pulmonary circulation to help improve blood flow to the lungs. Micah had had no issues coming off the heart and lung machines, but he had had problems with clotting, which is why he had been kept in surgery for so long. Initially they thought there might have been some internal bleeding somewhere they hadn't caught and Dr. Tam had gone back into the operating room. When he got back in though Micah's bleeding had gone down to normal levels and he started clotting again. Dr. Tam never found the source of the bleeding. He shook our hands and then he went home.

It's a strange feeling shaking the hand of the heart surgeon who has retooled your son's heart. Heart surgery, maybe surgery in general, is as much of an art form as it is a mechanical technique. There was a phrase we used to describe this when I was a reactor engineer, "There's a lot of art in that science." Science had given us the ability to do the things we were doing, but it took someone who had an intuitive feel for what to do to put the science to good use. I often wonder how much surgeons worry about their hands in day to day life. How worrying is spilling coffee on your hand, or maybe cutting your hand while cooking. I don't default to using a strong grip when I shake someone's hand, I try and judge from the hand I'm shaking what kind of grip I should use. But I know guys who could easily crush a hand in theirs if they felt like it. I wondered if any of this occurred to Dr. Tam. Probably not at that moment. He was probably thinking about getting home and getting into bed. We were more focused on finding out the next step for our son.

At that point I hadn't put a whole lot of thought into what was next, besides what I had been told by the various nurses and doctors and what I had read on the internet. But all of that was very technical in nature. The "living through recovery" portion was not something I could find a lot about. I knew he needed to get off the ventilator. I knew he needed to eat. What that actually looked like in practice, well, I didn't know that. So we went into the CICU, washed our hands thoroughly, and proceeded to where Micah was. His night nurse was a kid, well, young man, but I use the word kid because he seemed young to me. I mean, I've never had a real ability to tell the age of a person I'm looking at, but he seemed young. However, he was fairly knowledgeable, which is good, because I had a lot of questions.

Micah was laying in a smallish bed, raised up to roughly stomach height. He was wearing a diaper, which was his only clothing at that point, everything else on him had a medical purpose. His face was occluded by a ventilator and the tube that went down his throat that was helping him breath while he was sedated. He had a large tube coming out of his stomach that had a flow of blood and some other liquids. It ran through a semi-complex looking machine that included a bubbling bath of water. It didn't take too long, given my background before I realized it was a water seal for the chest tube. The chest tube was there to drain fluid buildup in the chest cavity, especially blood from the surgery. His feet and hands and several other places on his body were covered with a nest of smaller tubes, either medicine tubes or testing tubes.

The main event though, as it were, was his chest, which was both expected and unexpected in what I was seeing. When surgery is performed on a human one of our primary defense mechanisms is to puff up...obviously in an attempt to scare away the surgeon...but seriously it's just something that happens to us when we get cut open. Now this can pose a problem because the swelling can pull apart any stitches that are put in place to close the cut. This typically only happens when a large cut is made, for instance an incision that goes the entire length of the chest, on a child that is only 8 days post-birth. The outfall being that they cannot close the chest until several days after surgery and they put a mesh over the opened chest in order to protect it. We were told about all of this, of course, but what I imagined I would see and what I saw were not the same. I imagined a straight, flat, tight mesh across the opening in his chest, something that would look weird but wouldn't let me see what was inside. Instead the mesh was draped into his chest, it was not tight across the cut, but instead was inside the opening and molded around his organs. I could literally see my son's heart beating.

I'm honestly impressed that I didn't hit the floor. I've got a standard vagal response to cardiac stuff in medical situations. I have no issue seeing blood in general, but blood in a tube makes me light headed. This was a little bit more than blood in a tube. This was a heart, the integral part of the circulatory system, discussion of which in high school used to make me white as a sheet and forced me to leave the classroom. I was watching my son's heart beating, in his chest. After I got over the shock of it, I spent most of the rest of the night looking away from it, but stealing glances now and then. I knew that looking at it hadn't caused me to get dizzy or pass out so far, but I knew that it still could, so I tried to play it safe over the next several days. I would only look for a second or two at a time and then would look away and preoccupy myself with something else. Slowly I built up to just looking at it, looking at this tiny little heart beating away in my son's chest. But that was a couple days down the road. That night I didn't look very often and instead I sat down and talked with the nurse for a while.

We talked about a lot of things. How he was doing, what the machines were for, what they were looking at and what was important now after surgery. Some of the things were the same, most of it was different. There was no balancing act between sedation causing fluid buildup and Micah trying to breath over the ventilator. Now it was a game of get him down on fluids and stable enough so they could close his chest. Everything was focused on getting him over that hurtle, which we were told would probably be a couple of days. Now began the waiting game. We spent some time with him, read some scripture and prayed, looked over the machines, and eventually we decided to go to bed. Sleep came quickly for me, quicker than I would have expected, but then again, it had been a very long day.