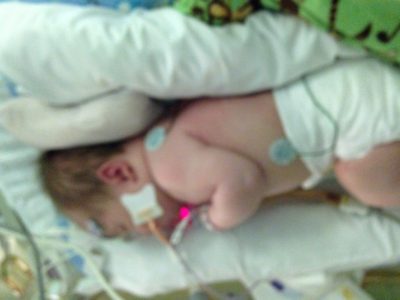 The response of our family and friends to our situation was nothing less than overwhelming. There were some phone calls with family right away and then periodically as time went on more calls would come. There were texts of support and prayer. And then there was the Facebook response with comments, prayers, and general support. It somewhat amazed me how many people were praying for us in so short a time span. So many friends, so much family, and then so many other people who only knew who we were because of the people we knew and because the people we knew liked or loved us enough to share our story and our need. I know now, beyond the shadow of a doubt, that my family is very loved and that if something happens to us there is a veritable army of people who are willing to help us.

Obviously the first wave of help came from our family on hand. My in-laws were already taking care of our daughter, our dogs, and our birds. Originally it was just supposed to be until we went home with the newborn. Now it looked like we might be in the hospital for a while. No idea at that time how long we would be in the hospital, but for sure it was going to be much longer than the original two days. They didn’t hesitate to offer to continue taking care of our daughter and pets. My dad was there as I have said before as an ear but also in a “make sure you take care of yourself” capacity. At first this took the form of making sure we were eating. Later it was taking care of the housing. Like, where we were gonna live while Micah was in the hospital since the hospital is an hour away from our house, with no traffic (more like 3 hours with traffic).

The first friends we saw after the move to Cooks brought us dinner on our second day. They were set to go out of the country the next evening and they wanted to stop by and wish us well before heading out. Funny enough, they initially didn’t know about what was going on and hadn’t planned on visiting us. They aren’t avid Facebook watchers and I hadn’t gotten around to texting and calling everyone at that point. Luckily another friend of ours talked to them and told them what was going on. So they were there that night, with lasagna, which was delicious, and which had been made for us by another friend of ours. I remember in the first couple of days whenever we ate I ate like a starving person. And I don’t mean that I ate quickly. What I mean is that when I finally had food in front of me I felt like I hadn’t eaten in a very long time and then acted accordingly. By that meal, I was able to slow down a little and talk some.

Before that meal we hadn’t really eaten with anyone who didn’t know at least the gist of what was going on. However, our friends who joined us that evening knew very little beyond that he had a heart defect. This was the first time I really remember explaining what was happening with Micah in much detail. It was also the first time I remember explaining what was happening after figuring out a decent amount of the information myself. When you get told “Your child has hypoplastic left heart syndrome” you don’t instantly know what the heck that means (I mean maybe you do if you’re a doctor, but I sure as heck didn’t). So you get information over time. The first NICU doctor told us some info. The Cooks NICU doctor told us some info. The nurses had told us some info. WebMD and the similar websites had told us some info. Now, by the evening of day two, we actually had enough info to answer a decent number of questions. We had enough of the story to tell some of the story.

Explaining what was going on had a profound effect on me that ran much deeper than I had expected. It was something I would experience over and over again and it did dull each time I explained it, but I feel it even today when I tell someone new about my son and his first months of life. I think some people characterize the feeling they get when they tell their story, whatever tragic twist their story has, as “making it real”. And I understand how that would be one way to characterize it. Before you speak, the story is just in your head. You can close your eyes and shut your mouth and it’s only in you. If it’s just in your head then it’s not real. But once you tell someone, once you open your mouth and spill your guts, it becomes real. Like I said, I get that way of looking at it, but I don’t think I would characterize it that way.

The tragic event, in our case at that moment it was my son’s dire peril, rapidly became a core part of who I was. It was a piece of me that was now embedded in my soul. That’s how children are anyways, but a child who could die at any moment, its makes the embedding process turbulent. It makes that piece of you that just became tied with them full of strain and tangles. It makes it so if you could cut me open and look at the different pieces of me, then that piece tied to my son would be glowing hot and burning to the touch. Talking to other people about it meant I had to touch that piece of me, that burning glowing hot piece. And to really relay the information about what was going on to the people I am talking to, I have to grab that piece and drag it out into the open air and I have to try and get them to touch it too. It very much is like trying to describe what it feels like to grab onto a hot piece of iron, while you are still holding the iron. I don’t think I cried at that time per se, but I remember my eyes getting watery.  And I remember crying other times I explained what was happening. And my eyes still get watery when I decide to go down into that well. I think they might always.

I am very grateful that I was with friends then. People who either understood what was going on and were supportive of us, or who maybe didn’t fully understand the effect all of this was having on us but were supportive anyways. I am very grateful that we had as many friends and family helping us as we did and really that we have as many family and friends helping us now as we do. It helps to have so much love that you barely feel the heat coming from the iron.