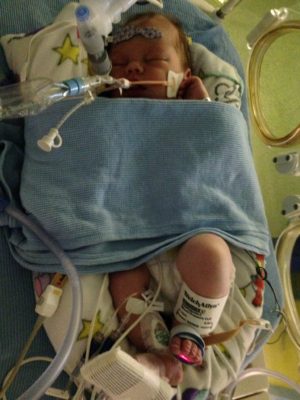 I could tell you that the night went well and that the hospital was very comfortable. I would have to add modifiers to that sentence though. Namely the phrase “for a hospital”. The room we were in had a couch that folded down into a bed and a chair that somewhat folded out. Neither was super comfortable, but compared to a normal NICU it was pretty awesome. It took a lot of the “what do we do now” out of the “we just got admitted to a children’s hospital and my two day old son is stable.”

Instead of scrambling to find lodging, we could just sleep there. Most NICUs are large rooms with bay’s in which the children are kept and in which parents can only spend so much time and definitely can’t sleep. This NICU had semi-private rooms for each child. We ended up with the smallest room on the floor, but it was still amazing to have what we had.

Before bed we had a scare. Micah’s breathing tube became clogged or stopped working well, or…something happened with him, I don’t know for sure, I’m not a doctor. Either way, I stood there and watched as his blood oxygen saturation went from the 70’s to the 60’s (some alarming) to the 50’s (a lot of machines alarming) to the 40’s. I spun around to look for someone and caught the eye of a nurse sitting across the hall, she was already in motion toward me. She grabbed a part of the breathing tube and started shifting things with the tubing to try and unclog them I think. I blinked and there were two more nurses in the room, including Dan, his nurse for the night. I stepped back to make room for people. Like I said our room was small and so I had to pick my way carefully backwards. When I looked back up there were six people (nurses, charge nurse, respiratory therapist) in the room.

One of them was messing with the breathing machine, one had a breathing mask over Micah’s face and was pumping it to make him breath, another one was holding the mask in place, another one was doing something with some medicine… And then as quickly as it started, it was over. His O2 saturation came back up, the machine was put back into place, and the room slowly emptied. I had done nothing in that whole exchange, but I felt drained. I felt like part of my life had just slipped away. Like if I looked in the mirror I would have quiet a few more grey hairs. But Micah was okay, or at least as okay as he could be at that time. His vitals were normal, or as normal for him as they could be.

As I stood there I don’t even remember feeling the whole rush of adrenaline followed by coming down from it followed by nervous energy trying to get rid of the unused adrenaline, because let’s face it, I did nothing of real value during the episode. I was a silent observer. These other folks, they had saved his life. I was in their hands. That was the feeling I felt. Micah, and by extension my wife and I, were in their hands, and I for one was very grateful that we were. They had saved his life. I could not ask for more. Gratefulness and relief. I remember thinking how strange it was that I wasn’t feeling the adrenaline rush. Maybe my body had figured out that my time of action was done for the day, that I had done all I could do. Maybe not. Either way, I was also grateful that I didn’t have a bunch of extra energy running through my veins.

That episode repeated itself overnight. My wife woke up for it, but I did not. That was the level of tired we were at I suppose. Or not even tired. Maybe not even exhausted. I think drained would probably be the best word. We woke up early the next morning to listen in to the shift change report. The reports slowly became more and more informative, the nurses were very good at explaining things to us as they went along, especially if we had questions. We also had the benefit of having three shifts in a row of nurses who had trainees, which meant we got to listen in on a lot of teaching. In no way were we any kind of experts, but as time went on we got a better feel for what stats they were looking at and what medicines were for which thing that was going on.

After shift change we went back to sleep. Cardiac round were around 8:00 am. We got back up for those. There wasn’t a whole lot to them, but we did get more of a feeling for what was going on and what the plan was going forward. For the moment, Micah’s surgery was going to be sometime in the coming week. He wasn’t bad enough that he needed to have it done immediately, but he wasn’t good enough that they were gung-ho about putting him under the knife. I don’t think we saw Dr. Tam there, I think he had something else he was doing. After that it was off to find food and start coordinating people coming to visit us. Micah was doing fine, for being sedated, on a ventilator, and being kept alive by medicine. He was fighting and surviving. We were in good hands.